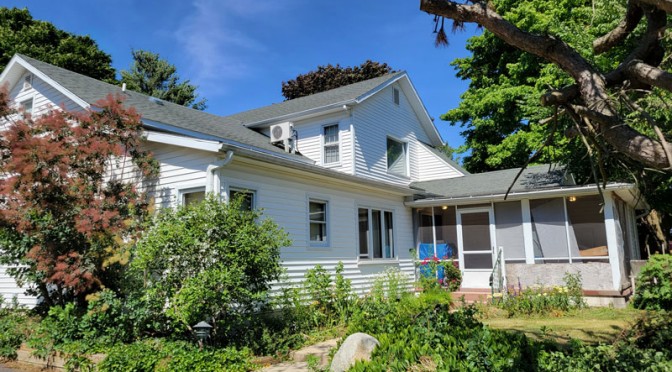 This is an outstanding opportunity to own historic multi-family home original built by pioneer and pre-statehood Fennville resident Harrison Hutchins.

This large home is split into 3 residences with separate entrances. The home and grounds may require some care but are loaded with character and major potential. A perfect candidate for a bed and breakfast or long/short term rental property. The grounds at one time extensively landscaped may require some updating but the elements of mature trees and other beautiful plant life shine through.

There are 2 outbuildings with ample garage space and the eastern structure has plumbing. The property is approximately 1 mile west of downtown Fennville with paved drives and a view of Hutchins Lake in the distance. This property will be offered at Public Auction in conjunction with the personal property and sells subject to owner confirmation of the high bid. This is a must see, one-of-a-kind, historic property!

Auction Terms: $20000 non-refundable deposit due on sale day per parcel. Balance paid in full within 30 days. Purchaser must sign sales agreement day of sale. This real estate sold ”as is” with no contingencies by legal description. Property will be sold subject to owner confirmation of high bid. Seller to furnish title insurance and warranty deed. Property sold free and clear of all liens, encumbrances, and back taxes, if any. Taxes will be pro-rated to the day of closing. Buyers and agents must verify dimensions and details.

Albert and Letha (Hicks) Crane lived over 70 years in the home built by Harrison Hutchins, one of the first pioneers of the Fennville area. Hutchins reportedly came to Michigan from Vermont in 1836, the year before Michigan became a state.

At that time the future Fennville was swampy, but the hill about a mile west of the present day town and near a spring fed lake seemed ideal to Hutchins. He bought 160 acres in Ganges Township.

Harrison married Laura Hudson in 1847. She was a multiple great-granddaughter of the explorer Henry Hudson. She had come to the Allegan area in 1846 and taught school near Ganges Township at 18 years old . They first lived in the log cabin on the hill but after a well digging mishap they moved to the southern edge of the nearby lake for easier access to water. The lake is now known as Hutchins Lake. They had 8 children.

Hutchins was active in clearing and building roads in the area. He obtained contracts for road building from the new State of Michigan. He and James McCormick built a corduroy (log) road through the community, now known as Fennville, to handle the heavy lumbering traffic and access to Fenn’s Mill, a saw mill there.

In 1871 Hutchins built a “modern farmhouse”, on the site of his first log cabin. The house is reportedly built of tulip poplar. A man and his team of horses were hired to bring the logs to the site and cut them with a portable saw mill. There were no fireplaces in this modern house but wood stoves and later coal were used for heating. The house had gas lighting which was considered superior to candle and kerosine lighting. Gas piping was discovered in the walls during the siding of the house by Albert and Letha about 100 years later.

The same year the house was completed, Harrison planted 1,000 peach trees, becoming the first commercial orchard in the area.

Albert Crane was born the year his parents bought the Hutchins property. Blakeslee and Muriel never lived in the house.

In 1939 Albert and Letha were married. Albert had attended Michigan State College, and Letha completed business school. Albert began farming the property he was purchasing across the road from the Harrison house while Letha worked in the office at Michigan Fruit Canners.

Albert wanted to hire a man to help with the farm work. He had made arrangements with his father to offer space for a man and wife to live on the west side of the Harrison house. According to Letha, an elderly woman named Mrs. Roberts lived on the east side of the house with several cats. Evidently, the prospective hired man’s wife hated cats and refused to live in the house. They were then offered the house on Albert’s farm and Albert and Letha would live in the west section of the Harrison home still belonging to Blakeslee Crane. It worked out well, as Letha became very fond of Mrs. Roberts, and learned many farm wife skills from her including making pies! Albert and Letha Crane lived there all their married life from 1939.

Because of the size of the house (about 4,000 sq feet) Blakeslee Crane eventually converted the house into 3 self contained apartments and added an outer staircase for the upper apartment. He also made an east and west driveway and 2 garages. Many of Blakslee’s children and their families lived in the other two apartments over the years, as did many local residents.

Albert and Letha eventually bought the house from Blakeslee Crane. Most changes to the original house were made in the west wing where Albert and Letha lived. A bedroom and dining room were added in the 1950s using cherry and American chestnut cut from the farm as paneling. Later, using a master craftsman, they paneled the living room with black walnut from the trees a great grandmother Lydia had planted to line the road by the house. The trees were cut down when the state widened the highway, but Albert and Letha saved them from being burned and put them to good use!

Albert and Letha had two children who grew up with numerous cousins from the different Crane farms surrounding the original Hutchins home. Grandchildren later spent many vacations with their grandparents using the upstairs apartment Letha had turned into a guest apartment, while she rented the east apartment.

Letha was widely known for her affection for children. She tended both decorative and vegetable gardens, maintained a beautiful home, and was a fabulous cook. She was widely read in the area of world politics and history and loved to discuss such with young people. She also started the first “U-Pick” of apples in the area in the early 1970s.

Farming was never an inspiration to Albert. However, with a full time hired man he managed to farm and to pursue his interests using his Caterpillar bulldozer to build roads, dig basements and clear land. Some husbands bring flowers to their wives. Albert brought huge rocks with the bulldozer to add to the garden decor. Gary, his nephew, and Sandy Crane now own Albert and Letha’s farm. Albert continued to work bulldozing until he was 95 years old.

There are a lot of stories made in the 151 years of this old house’s existence. More stories can be made and some have just started. Crane Orchards has planted a new peach orchard south of the “modern farmhouse” on the hill, continuing the legacy of an early Michigan pioneer.